Much has been said about the cliche imagery of handicraft enterprises in poverty alleviation. However, there is no denying the social and economic impact this modest unassuming industry has had the world over. Furthermore, with an estimated 300million people living in extreme poverty in Africa, the means becomes less important than the end.

In highlighting these 7 African enterprises, i am challenging you to look beyond you. To begin to appreciate the potential your craft enterprise has in job creation, social inclusion, peace building, women empowerment, MSME growth and cultural enhancement. The enterprises featured below are by no means exhaustive, neither are they in order of merit. 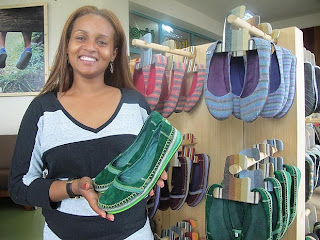 In the 9 years Sole Rebels has been in existence, it has had the distinction of not only being the world’s first Fair Trade footwear company, but also Ethiopia’s leading exporter of footwear. When Sole Rebels was founded, its priority mission was to create employment by leveraging on local know, thereby creating a product that was authentically Ethiopian, yet universally appealing. Several years later and with 400 workers on its payroll, Sole Rebels’ turnover is $1million, with export markets in 40 countries. Founder Bethlehem Tilahun (above) says that one of the reasons her company is so successful is because it is a self initiated and self directed enterprise- a homegrown solution to Africa’s problems. It has become a model enterprise of what can happen when young and motivated African entrepreneurs challenge the status quo of aid to Africa, demanding instead for more trade opportunities.

Gahaya Links (Rwanda)
Returning to her native Rwanda in 1994 just after the genocide, Janet Nkubana, founder & CEO of Gahaya Links realized that she had to get involved in stemming the destitution that was post genocide. In this acceptance speech featured above (The Hunger Project), Janet says that while she was initially content giving handouts to starving women who came daily to her door, she knew that sooner rather than later, she would have to do more. Noticing that they came begging with beautifully woven baskets, she figured that the very item they were using to beg could be their means out of poverty. And so Gahaya Links came to be. Leveraging on the traditional weaving skills that these women had, Janet started buying baskets from them, selling them and sharing the profits. Today, over 4000 women are either directly or indirectly employed by Gahaya. Their ‘peace baskets’ are to be found in world-famous stores including Macy’s and Kate Spade. “It is really amazing, Janet said in a recent interview with CNN African Voices, to see how a small piece of work, how culture can restore values in people, how healing comes through a small basket.”
Lulu Works Trust Limited ( South Sudan) 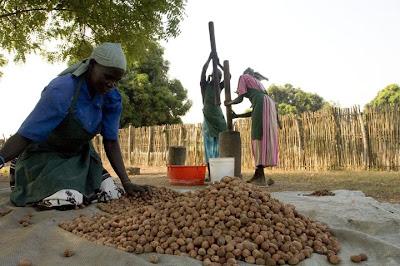 Dating back to 1955 until very recently, Sudan has been involved in one conflict or another. From the first & second civil war to the War in Darfur, women have borne the brunt most severely. In response to this resulting despair, hunger and need, the French NGO MEDIC founded the Lulu Livelihoods program in 2000. Focusing on the Lulu tree, a resource that grew in abundance, MEDIC set about educating Sudanese women on sustainable extraction of Lulu oil – a lightly scented oil that transforms readily into a creamy butter. However, it was not until 2005 that Lulu Works launched the Lulu Life brand label, manufacturing body butter, soap, scrub and lip balm, and becoming the only producer of Sudanese Shea Butter in the world. To remain sustainable and maximize on profits, Lulu Works does not export the nut in raw form, which is unlike the case for many of Africa’s natural resources. By adding value to the butter themselves and selling directly to the consumer, Lulu Works ensures maximum returns to over 400 women in Southern Sudan, helping them maintain a healthy household with money for food, clothing, education and medical care. InFocus Productions have captured in startling depth the story of Lulu Life in the documentary ‘The Brilliance Of Oil’.
Global Mamas  (Ghana) 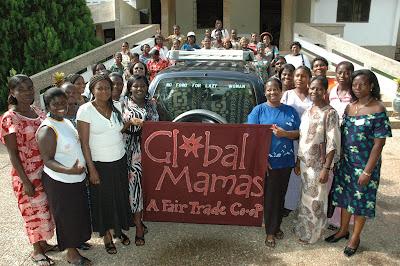 Celebrating its tenth anniversary this year, Global Mamas has easily become one of the most recognized brands within the global craft sector.
Global Mamas is a network of individually owned businesses working together to expand their collective global market share. From 6 founding members in 2003, to a network of 500 producers in 9 communities, Global Mamas has proven that a business model based on principles of the cooperative movement is sustainable. Registered as a member of World Fair Trade Organization (WFTO) and Fair Trade Federation (FTF), Global Mamas ensures all sale proceeds go directly to the women producing the merchandise, with steady and continuous orders from North America, Europe, Asia & Australia ensuring a steady income.  Additionally, Global Mamas works extensively with each producer on product development and quality control, providing artisans with personalized, hands-on business assistance to strengthen their capacity in running their own enterprises.
Kazuri (Kenya)
‘Do not despise the days of small beginnings’. There is rarely a story i have come across that amplifies this truth as much as Kazuri does. 38 years ago, Kazuri (which means small and beautiful in Swahili) began its operations. With a staff of 2 women and a tiny workshop as its base, Kazuri’s idea at the time was to experiment on handmade beads, rather than going into full production. As time went by however, Lady Susan Wood- founder of Kazuri- realized that there was a large number of single mothers who were looking for gainful employment and who could potentially be the workforce in a full scale factory. Fast forward to today and Kazuri has become a powerful brand, thanks to the 400 women who handcraft each and every one of 5 million beads produced every year.
A member of the World Trade Fair Organization, Kazuri believes that her workers are her biggest resource and therefore strives to apply the 10 principles of fair trade while engaging with the mostly single mothers who constitute the workforce.
One Mango Tree  (Uganda) 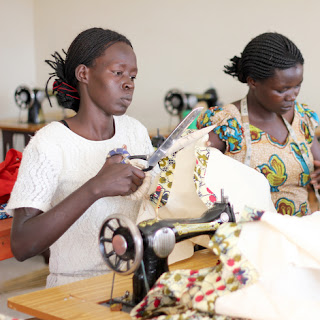 Founded by Halle Butvin in 2007, One Mango Tree works in Northern Uganda, a region that had been in the grip of terror group Lord’s Resistance Army since the mid 80s. Realizing that economic empowerment would provide a solid foundation for lasting peace and development, Halle set about building a business model that centered on identifying skilled artisans, providing design training and creating direct access to foreign markets. Since 2007, One Mango Tree has trained and employed 30 tailors, all of whom are given a flexible work-from-home schedule that allows them to attend to other family responsibilities. Taking advantage of locally available organic cotton, the company has recently diversified into creating their own fabric, most notably the Ikat inspired textiles.
Tintsaba (Swaziland)
What began as a simple handicraft project with 12 members in 1985 has over the years morphed into an organization that has brought up generations. Working with sisal, a natural resource found abundantly in Swaziland, Tintsaba has trained over 980 rural women in the art of spinning and weaving; giving them purpose, transferable skills and an income pegged on expertise. From the onset, Tintsaba was determined to make a social and environmental commitment to her crafts producers, holding regular training sessions on pattern & quality upgrading while encouraging environmental impact awareness. Tintsaba uses environmentally safe dyes, making sure that the raw material conversion utilizes no chemical and minimal amounts of water.  The result is a wide offering of high quality and beautiful products that have grown beyond traditional craft.
Is there another enterprise that you feel should be included on this list? By all means, do let me know, i will be happy to oblige:)
Curated by Christine Gitau. Sources (etsy.com, webaraza.com, ABNDigital.com, YouTube, Wikipedia.org, Swahili-imports.com, InFocus Productions, Globalgirlfriend.com Momfaze.com,  Bridgeforafrica.com, Openafrica.org, OneSimpleask.com, wtfo.com, ftf.org and the respective brand websites)

« Low Season: 6 ways to Make It Work For You » Is Your Product Past Its Expiry Date?

This site uses Akismet to reduce spam. Learn how your comment data is processed.